skip to main | skip to sidebar

MORT TODD
An Evening with a Real
COMIC CHARACTER!

As Editor of
CRACKED
America's Second Favorite Humor Magaine
And Comics Including
MONSTERS ATTACK!, WEIRD MENACE, CURSE OF THE WEIRD, BOOK OF THE DEAD and More!

And the MARVEL MUSIC line collaborating on comics with KISS, AC/DC, ALICE COOPER and the Estates of BOB MARLEY & ELVIS PRESLEY

Have a beverage, have a laugh, have a dance, and be in awe as you find your way in and out of Cartoon Limbo.
Admission $10, free to New Hope Arts members

Comicfix is very excited to announce that Iggy Pop, the wildest man in rock 'n' roll history, is set to portray the voice of Sadistik, the Diabolikal Super-Kriminal in a new animated series, Sadistik: Strip & Kill, directed by Mort Todd. While the details are still being worked out, there is no one more suitable in the world to bring the legendary King of Crime from the comic pages to animated life!

Iggy Pop has earned millions of fans from his amazing talent as singer, songwriter and actor and brings his immeasurable raw power to the role of Sadistik. His seminal band Iggy and the Stooges, inspired hundreds of thousands of punk and hard rock bands and his songs, including Lust for Life, Real Wild Child and China Girl are recognized classics.

The Sadistik photo novels have sold innumerable copies worldwide in many languages and has a large cult following, due in part to some offbeat 1960s action films from Turkey. Since 2005, Comicfix has been releasing the Sadistik comics in English for the first time.

Mort Todd has had a long career in comics, film, TV, animation and music production working with such companies as Marvel Comics, MTV and Playboy. In 2007 he produced the critically acclaimed documentary about Sadistik called The Diabolikal Super-Kriminal. Mort's company Comicfix produces music videos, animation and publishes comics.

Sadistik: Strip & Kill will be an animated 7-part mini-series created for the web and is loosely based on the 1966 photo novel and 1967 Turkish film of the same name. In it, Sadistik, along with his statuesque companion Dana, attempts to steal a top secret formula, battling gangsters and spies also after the formula, all the while trying to keep a step ahead of the authorities.

Other musicians have already recorded parts for the series including Matt Verta-Ray of the band Heavy Trash, British songstress Gemma Ray and Charles E. Hall, who recorded the song Beware: Sadistik for The Diabolikal Super-Kriminal film. Bands are also contributing to the soundtrack with the first video, They Call Him Sadistik by Psycho Charger, already released. Many other surprises are to be announced concerning other well-known personalities providing voices for the series.

Posted by Diabolikal Super Kriminal at 3.3.11 No comments:

The FIRST new SADISTIK series in Italian since the 1970s is being released from E.F. Edizoni.

Thanks to the interest provoked from the incredible documentary film, THE DIABOLIKAL SUPER-KRIMINAL (winner of the prize of the public to the Ravenna Nightmare Film Fest 2007 and now out on DVD in Italy), SADISTIK returns to Italy, after more than 40 years! The best example of sexy comic-noir-splatter in the world; the original KILLING, the King of the Crime, now known under the international appellate SADISTIK! A Deluxe Miniseries of 3 issues titled "CRIME AND DRUGS!", printed in limited edition, with new and astonishing dialogue by MORT TODD & SS-SUNDA. Do not miss these 3 remarkable rich adventures of "sex, drugs, crime and violence" with your protagonists, the psychopathic SADISTIK and his dear and bloodthirsty companion DANA...

Mort Todd, writer of the SADISTIK photo novels, has been professionally involved in comics since he was a teenager, and became Editor-in-Chief of Cracked Magazine at 23. He quickly turned the title from a fifth-rate Mad imitation to a third-rate one.

Almost 20 years before he started publishing SADISTIK, the premier photo comic, Mort dabbled in the medium at Cracked. Nanny Dickering was a long-running strip in the magazine, most notably drawn by the legendary King of Pin-Ups, cartoonist Bill Ward. Nanny would do satiric interviews with the "Kings" of various industries (from skateboards to hamburgers, along with celebrities) and Mort got it in his head to create a photo comic based on the feature.

A medly of Nanny Dickering poses as illustrated by Bill Ward, The King of the Pin Ups!
Who better to portray Nanny than an actual former Playboy Playmate? Model and musician Bebe Buell was essayed to play the role of the voluptuous Cracked interviewer and Mort himself played the role of the "Rock Video King." The photos were shot by Kevin McMahon, a talented TV director and producer who went on to produce TV series for such icons as Howard Stern, Jackie Mason and Geraldo Rivera (he was there when Geraldo got his nose busted)!

The cover to Cracked Collectors' Edition #69 featuring the photo comic with Mort Todd (as the Rock Video King) and Bebe Buell as Nanny Dickering.
One of the characters was portrayed by musician Charles E. Hall, who went on to record the revered "Beware: Sadistik!" theme song used in The Diabolikal Super-Kriminal film about the King of Crime. The song is also used for the Kickstarter Sadistik animation video that just premiered.

Most interestingly, the photo comic also showcased the media premiere of future blockbuster movie star Liv Tyler! Long before Lord of the Rings and other memorable feature films, Bebe's daughter Liv made her debut in a cameo as a secretary in a Cracked magazine photo comic!

A 9 year old Liv Tyler makes her acting debut in... Cracked Magazine?!
The photo comic appeared in Cracked Collectors' Edition #69 and is perhaps one of the only issue of Cracked Collectors' Edition to live up to its title! All involved in the Cracked production have gone on to greater things and made their mark on the entertainment world. Mort is currently releasing the SADISTIK photo novels and neck-deep in the production of the SADISTIK animated series. He has worked with many celebrities in the past and is drawing many of them together today to create voices for the project.

Soon, the earth-shattering announcement of the revered pop legend selected to do the voice of SADISTIK will be revealed and it will rock your world! Watch the video and see if you can guess who it is! And after you watch it, why not pledge a sum from $1 and up to the production and receive a Diabolikal Reward? You can get items from comics to T-Shirts, DVDs and original art from the series for your participation! Check it out at Kickstarter now!
Posted by Diabolikal Super Kriminal at 15.2.11 No comments:

Support the SADISTIK Strip & Kill Animated Series and get Rewarded!

As many may know, Mort Todd has been developing a wild animated series based on SADISTIK, the Diabolikal Super Kriminal! Now production has begun and YOU can be involved and get rewarded!

Working with Kickstarter, Mort's company Comicfix is raising funds and if you pledge as little as $1, you get something out of it; from copies of the screenplay, comics, DVDs and original art to Executive Producer credit! Payments are handled through Amazon, so even though you're dealing with a Super-Kriminal, you know it's super legit!

Watch the animation teaser and Mort Todd's discussion of the series at Kickstarter and donate if you can. If you can't, tell your millionaire friends about it!

Perhaps most exciting is the personality who has agreed to portray the voice of Sadistik... In the weeks to come his identity will be revealed, but for now we can say it is an internationally known pop star that has the necessary raw power to play the role!
Posted by Diabolikal Super Kriminal at 7.2.11 No comments: 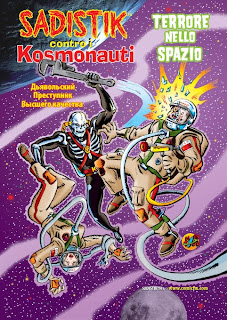 Here's a new SADISTIK pin-up by Mort Todd that will appear on the back cover of the next issue of the Italian sci-fi comic, INNER SPACE. The title "Terrore nello Spazio" (Terror in Space) was the original title of Mario Bava's Planet of the Vampires and follows the tradition of original Sadistik photo novel titles based on films.

"Дьявольский Преступник Высшего качества" is a translation of Diabolikal Super-Kriminal, which in Russian becomes "The Devil Criminal of the First-Rate Quality!"

Click here to see about Inner Space #1 and an exhibit featuring the art in Italy.
Posted by Diabolikal Super Kriminal at 25.11.10 1 comment:

The Diabolikal Super-Kriminal Documentary will have its Spanish Premiere in Barcelona on December 4th, 2010 as part of the Horrorvision Festival! This year's festival is dedicated to the recently deceased Jacinto Molina aka Paul Naschy, the infamous El Hombre Lobo of Spain!

Diabolikal Super Kriminal
My film THE DIABOLIKAL SUPER-KRIMINAL had its American premiere July 25,2009 at the Sand Diego International Comic-Con and received Special Mention! Contact us if you would like to set up a screening for your film festival, comic convention or other event!

NEW: SADISTIK: Violence Visits a Voyeur! #1 All THRILLS, No FRILLS!